First, let’s talk about the intuition behind contrastive learning. Below, we can see a traditional game that many kids play:

According to many surveys, kids learn more easily new concepts in this way than reading a book about animals. But why does this method work better?

It turns out that it is easier for someone with no prior knowledge, like a kid, to learn new things by contrasting between similar and dissimilar things instead of learning to recognize them one by one. At first, the kid may not be able to identify the dog. But after some time, the kid learns to distinguish the common characteristics among dogs, like the shape of their nose and their body posture.

Let’s suppose that we have three images

. The first two images depict a dog, and the third image depicts a cat, and we want to learn a low-dimensional representation for each image ( 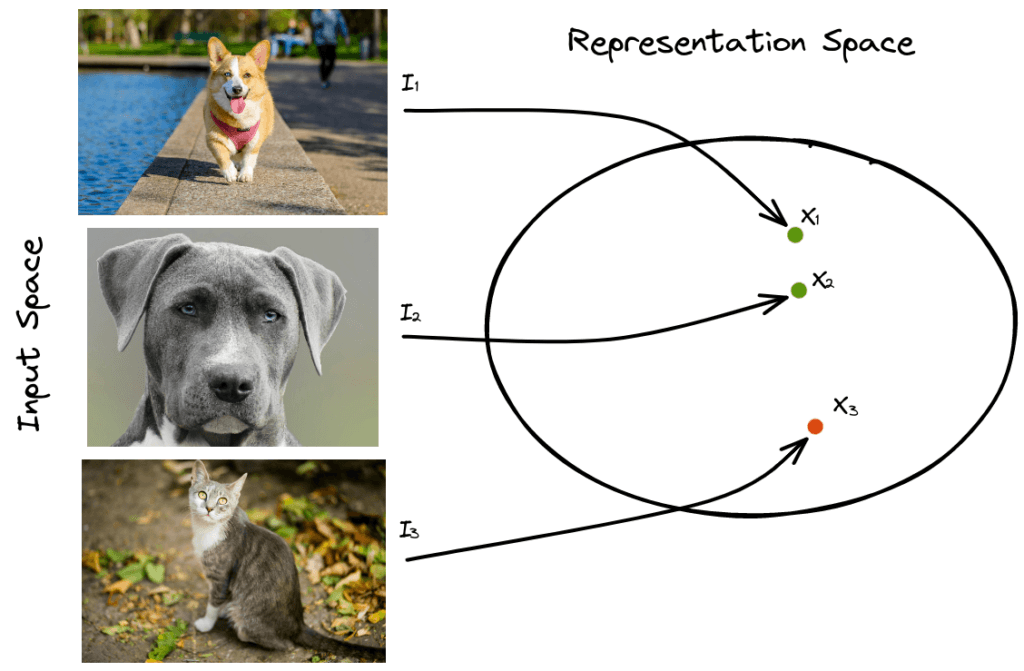 and maximize the distances

The sample that is similar to the anchor sample (

) is defined as a positive sample (

) and the one that is dissimilar as negative (

The most important part of contrastive learning is the training objective that guides the model into learning contrastive representations. Let’s describe the most common objectives.

More formally, we suppose that we have a pair

that is equal to 0 if the samples are similar and 1 otherwise. To extract a low-dimensional representation of each sample, we use a Convolutional Neural Network

that encodes the input images

into an embedding space where

. The contrastive loss is defined as:

is a hyperparameter, defining the lower bound distance between dissimilar samples.

If we analyze in more detail the above equation, there are two different cases:

An improvement of contrastive loss is triplet loss that outperforms the former by using triplets of samples instead of pairs.

Specifically, it takes as input an anchor sample

and a negative sample

When we train a model with the triplet loss, we require fewer samples for convergence since we simultaneously update the network using both similar and dissimilar samples. That’s why triplet loss is more effective than contrastive loss.

The idea of contrastive learning can be used in both supervised and unsupervised learning tasks.

In this case, the label of each sample is available during training. So, we can easily generate positive and negative pairs or triplets by just looking into the labels.

However, generating all possible pairs or triplets requires a lot of time and computational resources. Also, in every dataset, there are many negative pairs or triplets that already satisfy the contrastive training objectives and give zero loss resulting in slow training convergence.

To deal with this problem, we have to generate hard pairs and hard triplets, meaning that their loss value is high, i.e., similar pairs that are far apart and dissimilar pairs that are very close. Many hard negative mining methods have been proposed that usually look into the representation space for hard pairs and triplets using fast search algorithms. In natural language processing, a simple way of generating a hard negative pair of sentences is to add in the anchor sentence a negation word.

When we don’t have labeled samples, self-supervised learning is used where we exploit some property of our data to generate pseudo-labels.

A famous self-supervised framework for unsupervised contrastive learning is SimCLR. Its main idea is to generate positive image pairs by applying random transformations in the anchor image like crop, flip and color jitter since these changes keep the label of the image unchanged: