2. The Concept of Circular Buffer

A circular buffer is an array of constant length, and we use it to store data in a continuous loop. It is also known as a ring buffer because it stores the data circularly.

Data is read from the buffer in a FIFO (first in, first out) manner, meaning that the oldest data is read first. We use the buffer to store and transfer data between two points, such as a producer and a consumer.

One example of a circular buffer in the non-computing world is in manufacturing and production processes. For example, in a conveyor belt system, we can use a circular buffer to store and process items as they move along the belt.

In a just-in-time (JIT) manufacturing system, we use a circular buffer to store and process raw materials in the production process.

Circular buffers, circular queues, cyclic buffers, and ring buffers are types of data structures in computer science that use a single, constant-size buffer as though they link end to end.

Circular buffers have a pointer that points to the next empty position of the buffer, and we increment this pointer with each new entry. This means that when the buffer is full, and we add a new element, it overwrites the oldest element. This ensures that the buffer does not overflow and new data does not overwrite important data: 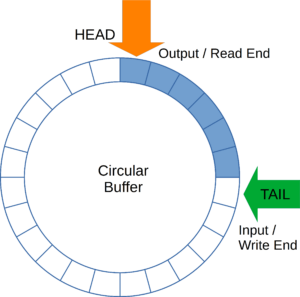 The time complexity of adding an element to a circular buffer is constant O(1). This makes it highly efficient in real-time systems where we must add and remove data quickly.

We can visualize a circular buffer data structure as a circular array where the buffer wraps around when it reaches the end, allowing for efficient memory use.

When the head and tail pointers meet, we consider the buffer is full. One way to implement a circular buffer is to use an array with a modulo operator to wrap around when we reach the end of the array: 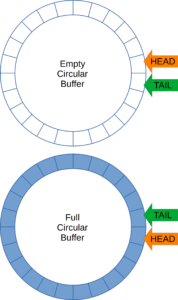 For example, in real-time systems where we must add and remove data quickly, a circular buffer can be a more efficient choice. The structure also benefits data streaming, low-level communication and embedded systems.

Practical applications of circular buffers can be found in various fields, including computer science, electrical engineering, and telecommunications.

We use circular buffers in a variety of applications. One of the most common applications is for streaming audio and video. We store the data in the circular buffer and then read it in a FIFO manner. This allows for smooth playback of the audio or video.

One common application is device drivers for communication protocols such as serial and parallel ports. Other applications include digital signal processing, network routers and packet switching.

The main advantage of a circular buffer is that it allows for efficient use of memory by using a constant-size buffer as if it links end-to-end, with constant time complexity for adding and removing elements, avoiding overflow errors, and better memory usage.

The main benefit of a circular buffer is that it is a very efficient way to store data. The constant length of the buffer ensures that we use the memory space efficiently and that we can access the data quickly.

One of the main advantages of circular buffers is that they have a constant time complexity for adding and removing elements.

One disadvantage of circular buffers is that they have a constant size. This means that once the buffer is full, new data will overwrite the oldest data.

Another disadvantage of circular buffers is that they can be difficult to implement correctly in a multi-threaded or multi-process environment.

Lastly, a circular buffer has its own set of complications when handling circularity, like dealing with the tail and head pointers and updating them when read or write occurs. This complexity can be overkill for simple tasks where a linear buffer can be sufficient.

5.3. Comparing Circular Buffer With Other Buffers

There are several types of buffers in addition to circular buffers, each with its own set of advantages and disadvantages.

We implement linear buffers as a simple array or linked list. They clearly distinguish between full and empty status and are easy to implement. We can easily resize and use them in any scenario.

We implement a linked list buffer using a linked list data structure. Each buffer element contains both the data and a pointer to the next element.

A stack buffer is a last-in, first-out (LIFO) data structure. They have the advantage of having simple logic and are efficient in the case of a single thread, but they are not suitable for multiple threads accessing it.