In this tutorial, we’ll explain the Candidate Elimination Algorithm (CEA), which is a supervised technique for learning concepts from data. We’ll work out a complete example of CEA step by step and discuss the algorithm from various aspects.

A concept is a well-defined collection of objects. For example, the concept “a bird” encompasses all the animals that are birds and includes no animal that isn’t a bird.

Each concept has a definition that fully describes all the concept’s members and applies to no objects that belong to other concepts. Therefore, we can say that a concept is a boolean function defined over a set of all possible objects and that it returns

only if a given object is a member of the concept. Otherwise, it returns

In concept learning, we have a dataset of objects labeled as either positive or negative. The positive ones are members of the target concept, and the negative ones aren’t. Our goal is to formulate a proper concept function using the data, and the Candidate Elimination Algorithm (CEA) is a technique for doing precisely so.

Let’s say that we have the weather data on the days our friend Aldo enjoys (or doesn’t enjoy) his favorite water sport:

We want a boolean function that would be

for all the examples for which

. Each boolean function defined over the space of the tuples of

is a candidate hypothesis for our target concept “days when Aldo enjoys his favorite water sport”. Since that’s an infinite space to search, we restrict it by choosing an appropriate hypothesis representation.

For example, we may consider only the hypotheses that are conjunctions of the terms

For instance, the hypothesis

can be represented as follows:

and would correspond to the boolean function:

We call the hypothesis space

the set of all candidate hypotheses that the chosen representation can express.

There may be multiple hypotheses that fully capture the positive objects in our data. But, we’re interested in those also consistent with the negative ones. All the functions consistent with positive and negative objects (which means they classify them correctly) constitute the version space of the target concept. The Candidate Elimination Algorithm (CEA) relies on a partial ordering of hypotheses to find the version space.

The ordering CEA uses is induced by relation “more general than or equally general as”, which we’ll denote as

. We say that hypothesis

is more general than or equally general as hypothesis

if all the examples

labels as positive are also classified as such by

This relation has a nice visual interpretation: 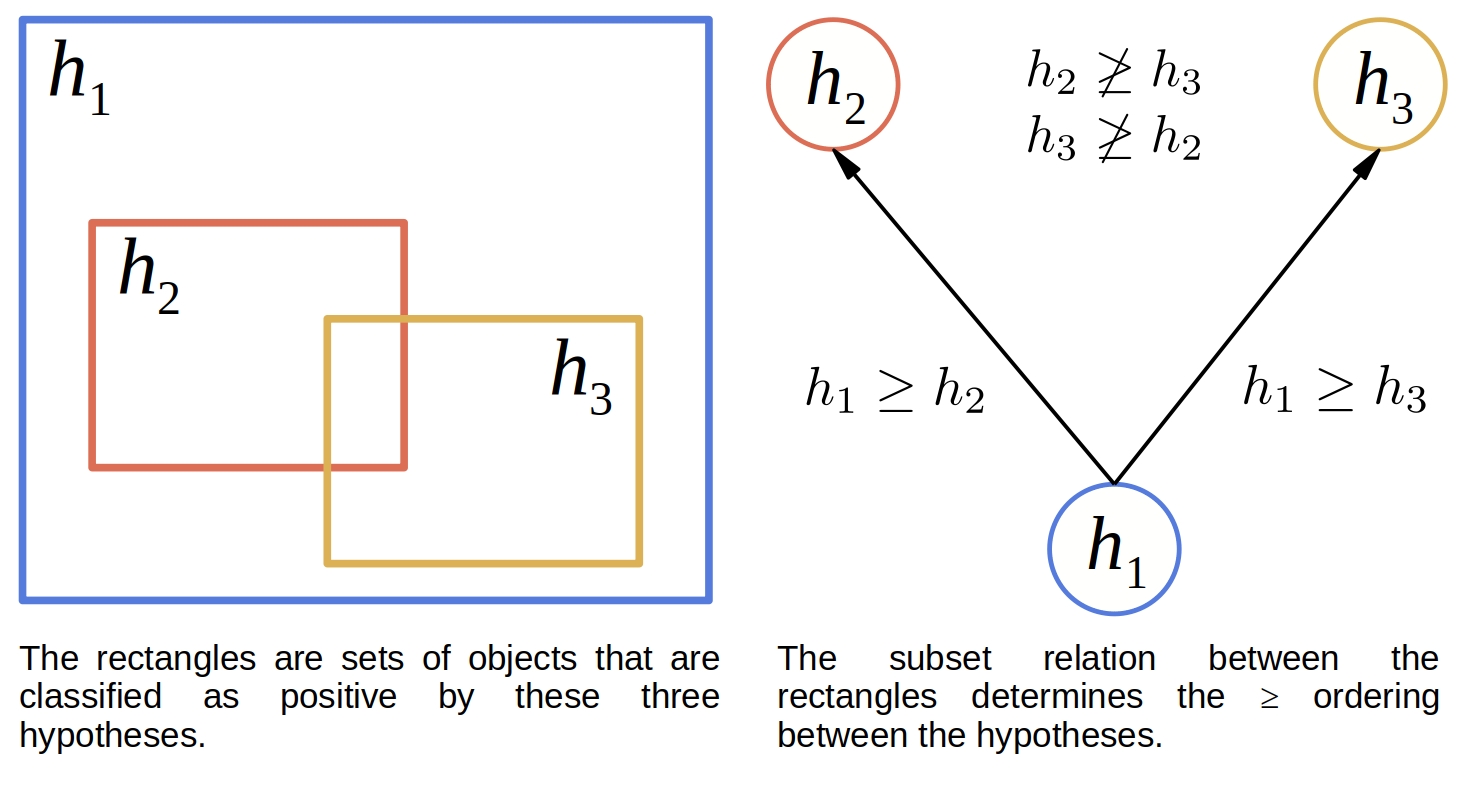 are analogously defined. For brevity, we’ll refer to

as “more general than” from now on.

by identifying its general and specific boundaries,

contains the most general hypotheses in

, whereas the most specific ones are in

. We can obtain all the hypotheses in

by specializing the ones from

or by generalizing those from

the version space whose general and specific boundaries are

contains only the most general hypothesis in

contains only the most specific hypothesis in

. CEA processes the labeled objects one by one. If necessary, it specializes

correctly classifies all the objects processed so far: 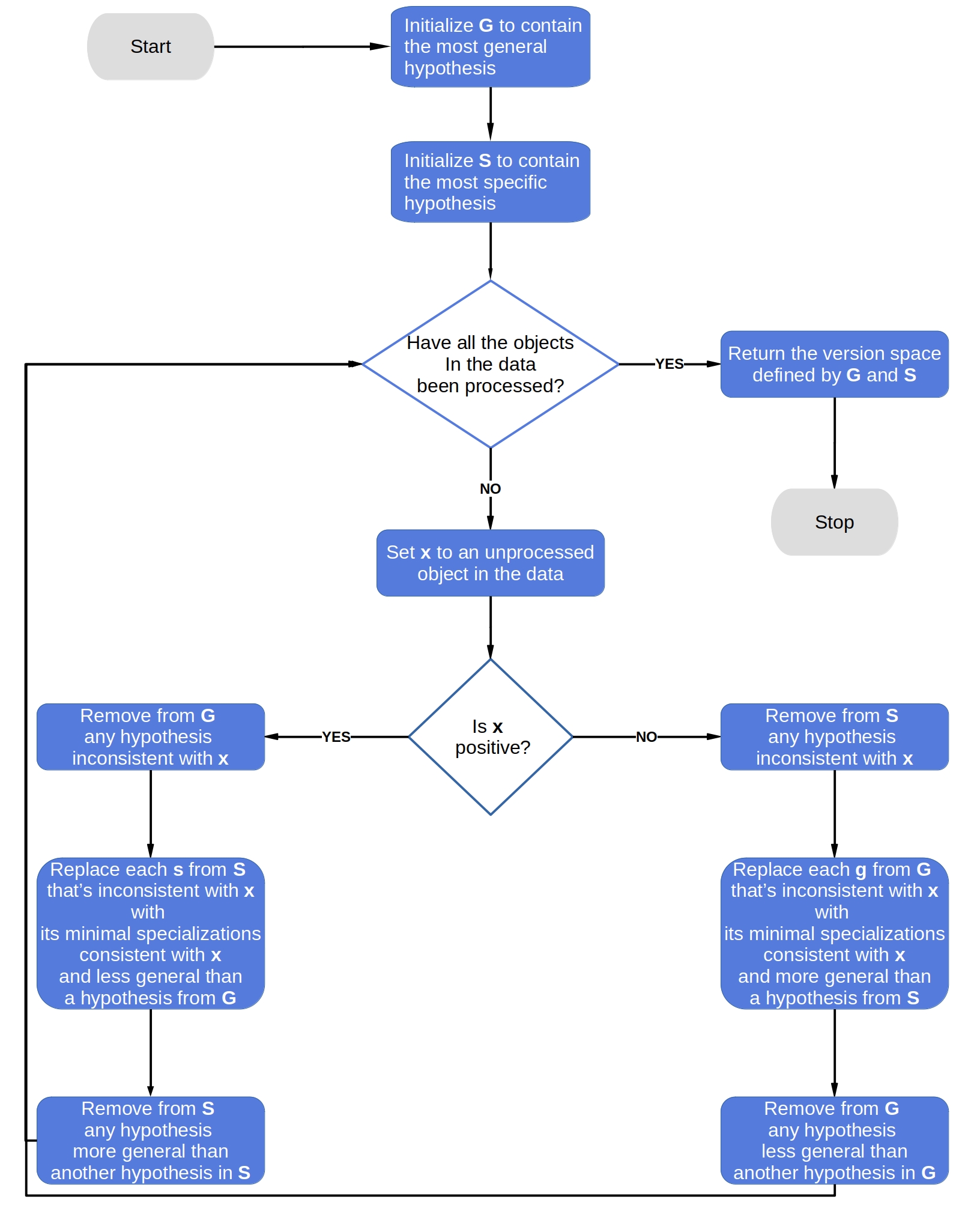 5. An Example of CEA in Practice

Let’s show how CEA would handle the example with our friend Aldo.

In the beginning, CEA initializes

. The space bounded by

, is the whole hypothesis space 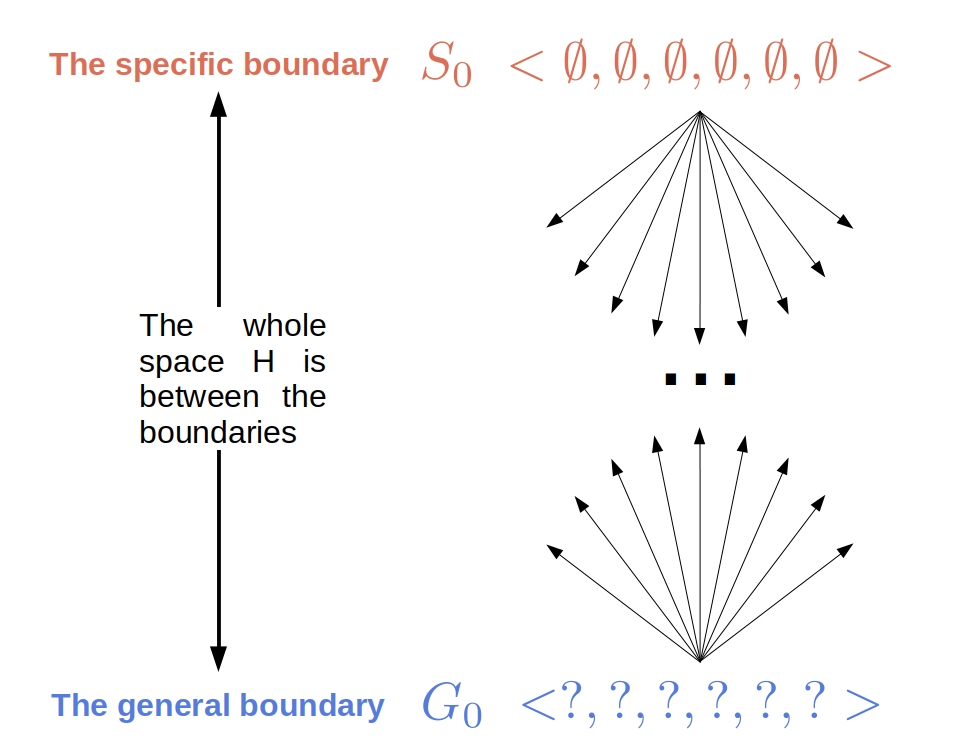 Since the only hypothesis in

, is consistent with the object

, CEA doesn’t change the general boundary in the first iteration, so it stays the same:

as the only hypothesis in

is not consistent with the object, so we remove it. The minimal generalization of

that covers the object

is precisely the hypothesis

. It’s less general than the hypothesis in

. So, the updated specific boundary is 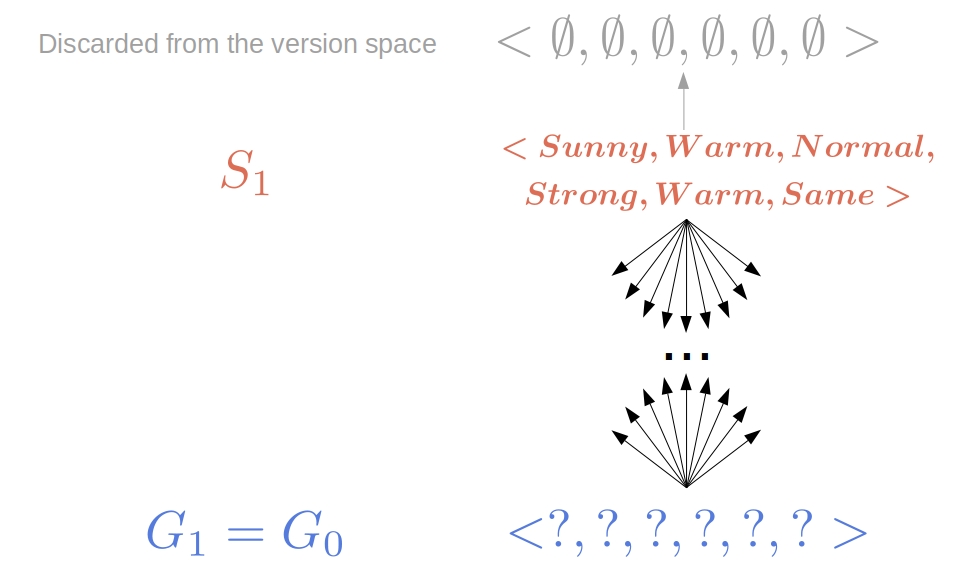 is consistent with the positive example

, no changes to the general boundary are necessary. So, it will hold that

is overly specific, so we remove it from the boundary. Its minimal generalization that covers the second positive object is

, which is less general than 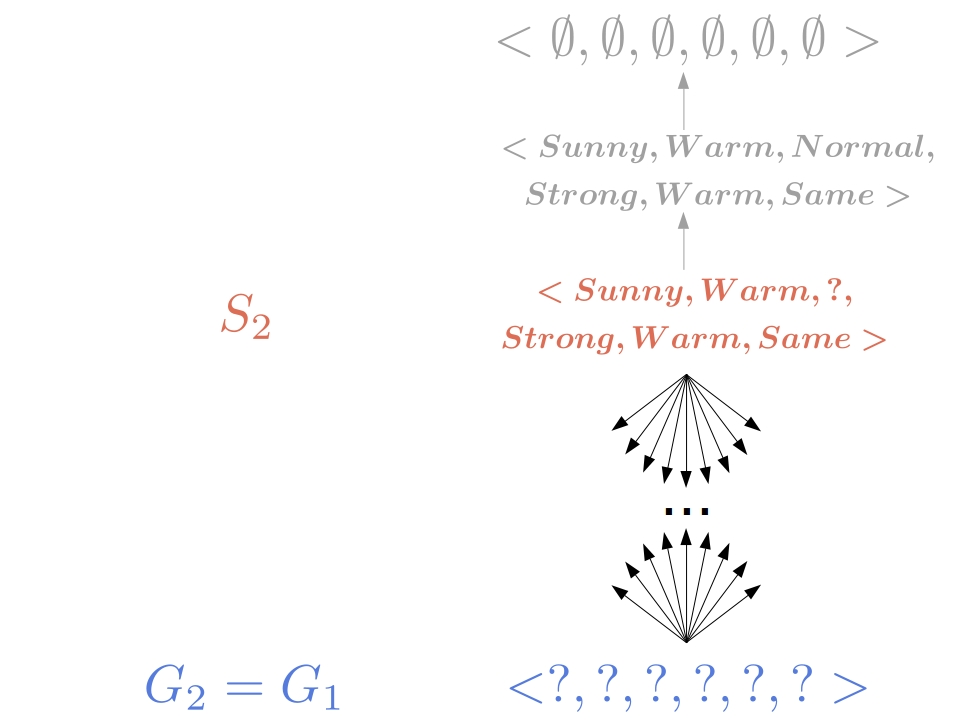 The third example in our data (

) is negative, so we execute the else-branch in the main loop of CEA. Since

is not inconsistent with the object, we don’t change it, so we’ll have

is too general and remove it from the boundary. Next, we see that there are six minimal specializations of the removed hypothesis that are consistent with the example:

To specialize a hypothesis so that it correctly classifies a negative object, we replace each

in the hypothesis with values other than the one in the object. So, we have

are more general than the hypothesis

. A hypothesis that isn’t more general than at least one hypothesis in the specific boundary doesn’t classify all the positive examples as positive. That’s why we keep only the minimal specializations that are

than the hypothesis in 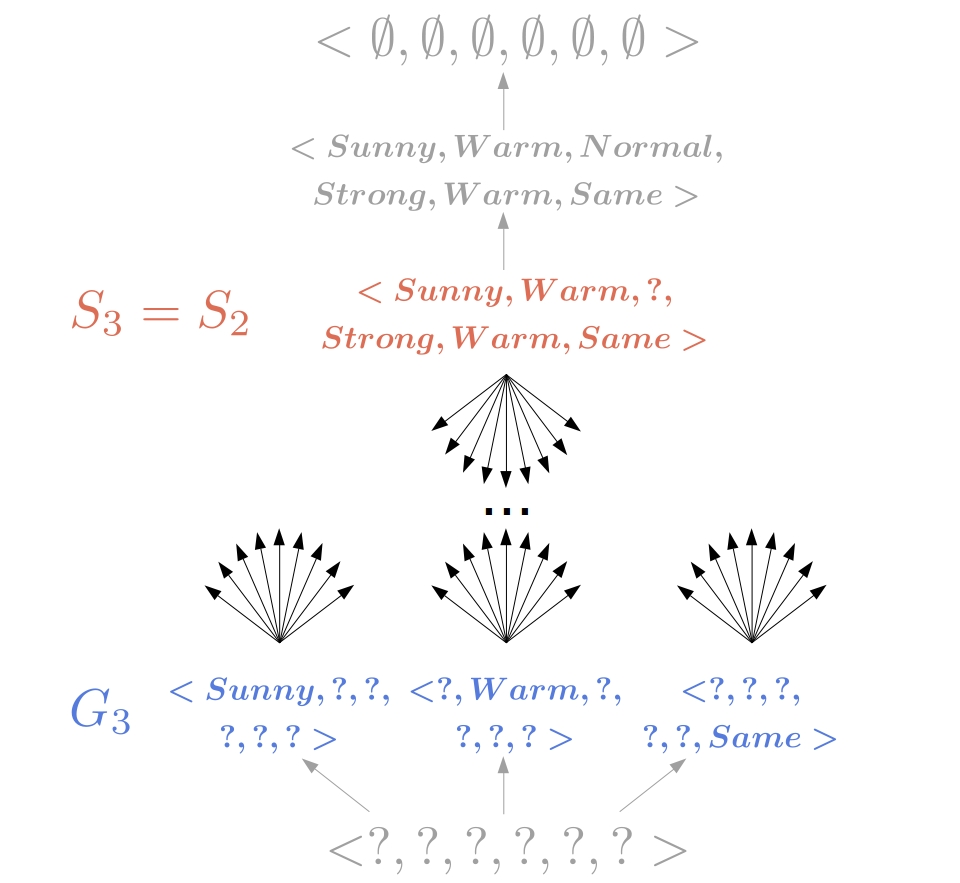 is inconsistent with the object

, we remove it. We can’t specialize it because all its specializations wouldn’t classify the object as positive. Similarly, we can’t generalize it as that wouldn’t be consistent with the negative object we previously processed. Therefore, the only option is to remove the hypothesis.

is overly specific, so CEA generalizes the hypothesis in

, and we get a new boundary 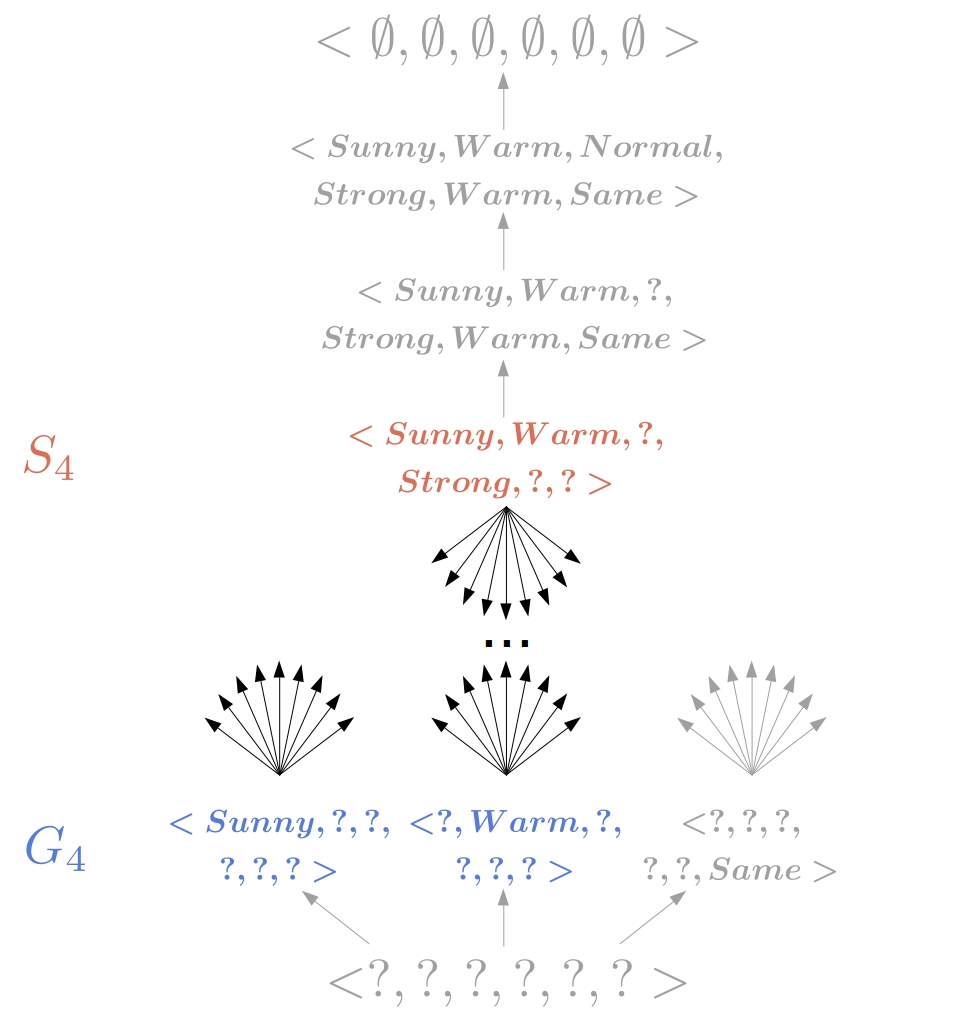 contains a hypothesis that correctly classifies all the training objects and the data have no errors, then the version space CEA finds will include that hypothesis. If the output version space contains only a single hypothesis

, then we say that CEA converges to

. However, if the data contain errors or

doesn’t contain any hypothesis consistent with the whole dataset, then CEA will output an empty version space.

The order in which CEA processes the training objects doesn’t affect the resulting version space, but it affects the convergence speed. CEA attains the maximal speed when it halves the size of the current version space in each iteration, as that reduces the search space the most.

A good approach is to allow CEA to query the user for a labeled object to process next. Since CEA can inspect its version space, it can ask for an object whose processing would halve the space’s size.

If the version space

contains multiple hypotheses, then we say that CEA has partially learned the target concept. In that case, we must decide how to classify new objects.

One strategy could be to classify a new object

only if all the hypotheses in

agree on its label. If there’s no consensus, we don’t classify

. An efficient way of doing so is to consider the space’s boundaries

. If all the hypotheses in

as positive, then we know that all the other hypotheses in

will too. That’s because they’re all at least as general as those in

. Conversely, we may test if the hypotheses in

is negative. Hence, there’s no need to look beyond the boundaries if we seek unanimity.

On the other hand, if we can tolerate disagreement, then we can output the majority vote. If we take all the hypotheses in

to be equally likely, then the majority vote represents the most probable classification of

. Additionally, the percentage of hypotheses classifying

as positive can be considered the probability that

is positive. The same goes for negative classification.

contains no hypothesis consistent with the dataset, then CEA will return an empty version space. To prevent this from happening, we can choose a representation that makes any concept a member of

is the space the objects come from, then

should represent every possible subset of

should correspond to the power set of

But, the problem is that a so expressive space

will cause CEA to overfit the data! The returned version spaces specific boundary will memorize all the positive training objects (

), whereas its general boundary will memorize all the observed negative instances (

As a result, such a version space provides the unanimous vote only when asked about the training objects. For any other object

, half the hypotheses in

classify it as positive, while the other half classifies it as negative. Since

corresponds to the power set of

, we know that for any

as positive, there must be an

on all the objects except for

, which it labels as negative. But since

disagree only on a non-training object,

. So, unrestricted hypothesis spaces are useless, and some sort of restriction is necessary.

10. From Inductive Bias to Deductive Reasoning

That restriction biases the search towards a specific type of hypothesis and is therefore called the inductive bias. We can describe bias as a set of assumptions that allow deductive reasoning. That means that we can prove that the version spaces output correct labels. Essentially, we regard the labels as theorems and the training data, the object to classify, and the bias as the input to a theorem prover.

If we require the unanimous vote of hypotheses in a version space, then the inductive bias of CEA is simply:

That’s the weakest assumption we’d have to adopt in order to have formal proofs for labels. However, we should note that the proofs will be semantically correct only if the bias truly holds.

In this article, we explained the Candidate Elimination Algorithm (CEA). We showed how to use it for concept learning and also discussed its convergence, speed, and inductive bias.