In this brief tutorial, we’ll learn about how big-O and little-o notations differ. In short, they are both asymptotic notations that specify upper-bounds for functions and running times of algorithms.

Let’s read on to understand what exactly it means to be asymptotically tight.

Big-O and little-o notations have very similar definitions, and their difference lies in how strict they are regarding the upper bound they represent.

For a given function

is a set of functions that are, after

, smaller than or equal to

. The function’s behavior before

is unimportant since big-O notation (also little-o notation) analyzes the function for huge numbers. As an example, let’s have a look at the following figure: 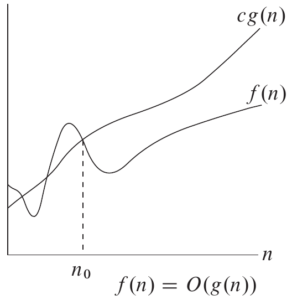 is only one of the possible functions that belong to

is not always smaller than or equal to

, it never goes above

The equal sign in the definition represents the concept of asymptotical tightness, meaning that when

grow at the same rate. For instance,

satisfies the equal sign, hence it is asymptotically tight, while

For more explanation on this notation, look at an introduction to the theory of big-O notation.

Little-o notation is used to denote an upper-bound that is not asymptotically tight. It is formally defined as:

for any positive constant

Note that in this definition, the set of functions

are strictly smaller than

to have the same growth rate as

Intuitively, this means that as the

In addition, the inequality in the definition of little-o should hold for any constant

, whereas for big-O, it is enough to find some

that satisfies the inequality.

If we drew an analogy between asymptotic comparison of

and the comparison of real numbers

Let’s have a look at some examples to make things clearer.