that minimizes or maximizes the output value of a function

can be transformed into a minimization problem of

. So, from now on, we’ll talk only about minimization problems.

Formally, we usually refer to the function

that we want to minimize as an objective function or loss function.

An example of a simple minimization problem is the Linear Least Squares, where we want to approximate a linear function given some sample data. In this case, the objective function is defined as:

Moreover, we have the minimum value denoted as:

3. Derivative of a Function

An essential part of every gradient-based algorithm is the gradient, as the name suggests. First, we’ll focus on the case of a single input

where the gradient of a function

is defined as the derivative

Geometrically, the derivative of a function at point

corresponds to the function’s slope at this point. This concept is illustrated in the below diagram: To put it more simply, the gradient specifies how a small change in input will affect the output.

It is based on a very simple observation:

for small changes in

. So, we can reduce the value of an objective function

by changing the input

Now, let’s present an example to illustrate better how gradient descent works. We suppose that we want to minimize the function:

We aim to find the global minimum of

. So, we start at a random input value of

The diagram below shows the whole procedure: 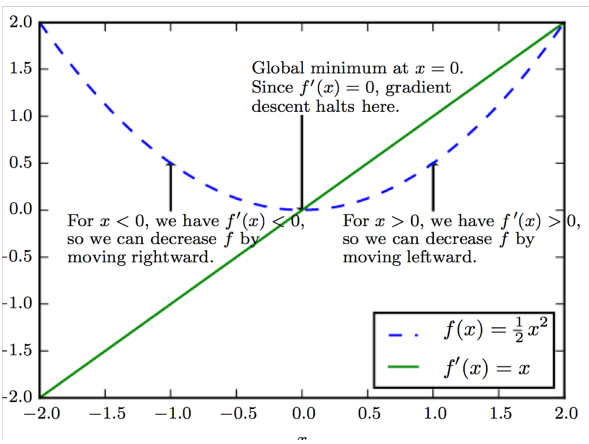 We stop the procedure when after some iterations, the change in the value of

will be less than a predefined small threshold, meaning we have reached the minimum of the function.

In case of multiple inputs (

), we have to use partial derivatives

that measures how the function

changes as only one of its inputs

changes. In this case, the gradient is a vector that contains the partial derivatives of the function and is denoted as

by moving in the direction of the negative gradient.