Hash lookup is used in the hash table data structure. We use the hash data structure to map keys and values in an unsorted way. Additionally, a key means a unique identifier that points to the values we’re storing. A hash table is also known as the hash map.

Hash lookup is the process of searching a key from the hash table. Let’s understand hash lookup with an example. Suppose we want to order food online from a restaurant. While ordering food, we need to enter certain information, including phone number, address, and payment details. Therefore, the easy way for the restaurant to keep track of the food orders is to store the orders with either a phone number or the serial number. Hence, a user can either enter a phone or a serial number in the system to check the status of the placed food order.

Secondly, there’s a probability of duplicate entries and vacant indices. It can result in slowing down the search and information retrieval process: 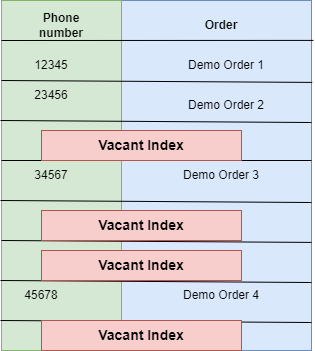 Therefore, to overcome this issue, we need to reduce the size of the index. Additionally, we must ensure that the table is redundant-free. One possible approach is to divide all phone numbers with a fixed number and use the quotient as the index.

Therefore, the restaurant could use the phone number to get the status of the food orders and successfully reduce the size of the table. Instead of storing long digit phone numbers as a key, we’re storing single-digit numbers. For example, for order number 3, the user enters the phone number. We retrieve the order status from the index 7 in the log table: 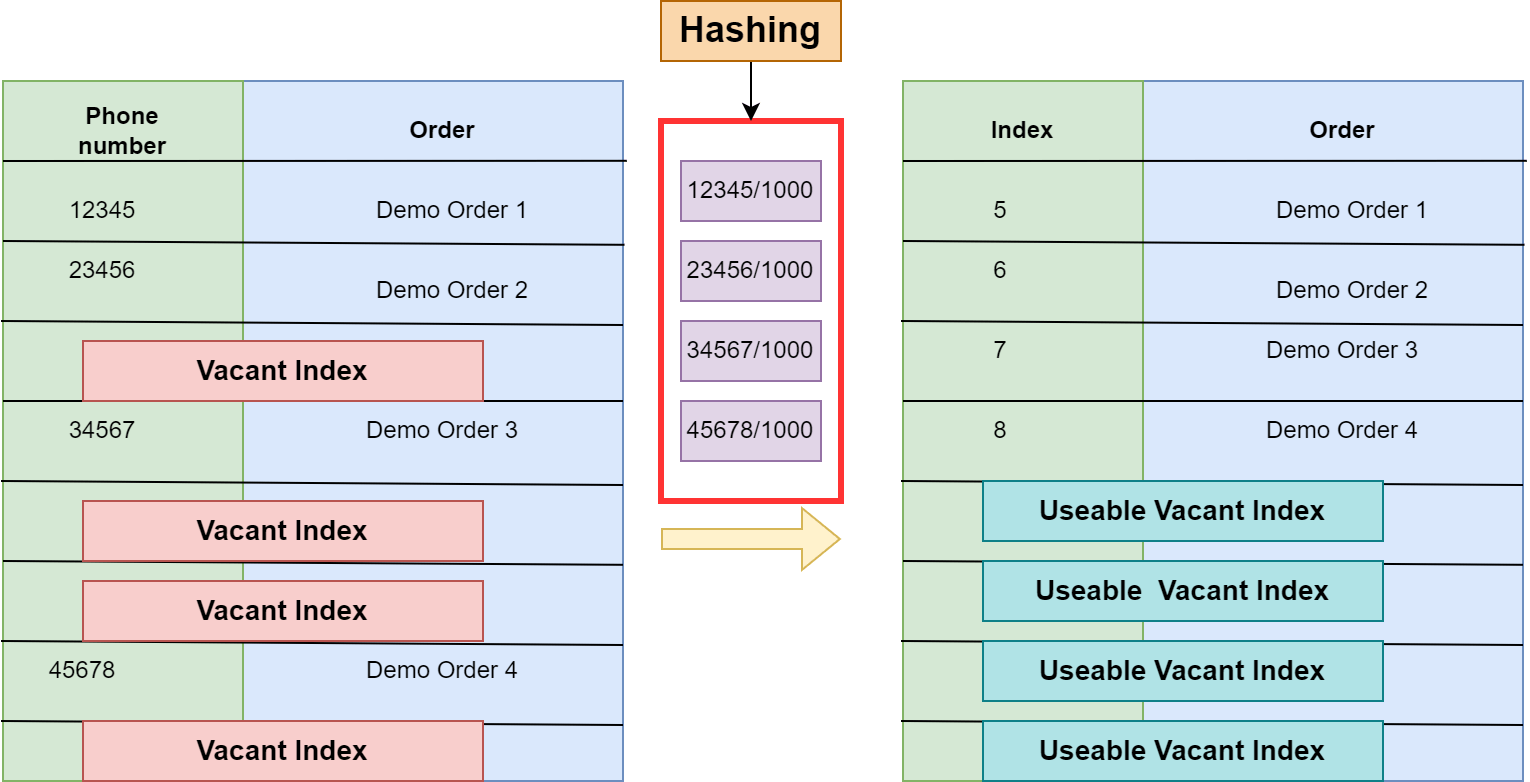 It’s an exact example of hashing. Here, we use the phone number as a key. Additionally, we calculate the indices of the table using a simple hash function. The logbook is a hash table. In this example, it’s just a coincidence that phone numbers are sorted in increasing order, but it’s not a necessary condition in the hash table data structure: 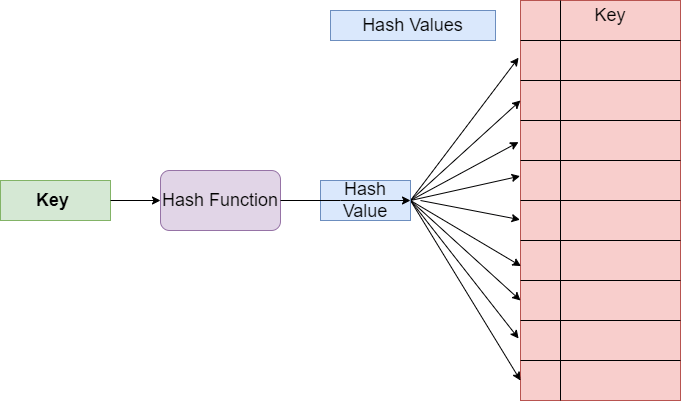 In the hash table data structure, it’s essential to use a good hash function. For example, the simple hash function we used is limited to 10 output indices. Hence, we might get the same hash value for multiple keys (phone numbers). Therefore, in order to avoid collisions, separate chaining is one of the most popularly used.

General operations in the hash table data structure such as search, insertion, and deletion take

in best as well as in the average cases. In the worst case, it can take

. Complexity in the hash table also depends upon the hash function. A complex hash function can take significantly more time than a simple one. Let’s discuss the best, average and best case time complexity for hash lookup (search) operation in more detail.

When the hash function is appropriately defined, the number of collisions is less. Additionally, when the number of input entries is large, the hash table contains chaining. The average case occurs when the length of all the chains is the same. In this case, in order to calculate the hash value from the given input key takes

time. Additionally, finding the location of the element in the hash table takes

elements in the table, the hash lookup operation takes

Binary search is widely used and one of the fastest search algorithms. It works based on the divide and search principle. The data set must be sorted in increasing or decreasing order before providing it as input to the binary search algorithm. In this algorithm, we first compare the target value with the middle value of the sorted array.

Let’s take the previous example of the restaurant and suppose the attendant is using the binary search algorithm to find the details of the orders using a phone number as a key. Therefore, the first step is to store all phone numbers in either increasing or decreasing order. Let’s suppose we store them in increasing order:

Now when the attendant wants to search for details of any orders, firstly, he opens the logbook and compares the middle phone number with the target phone number. Depending upon the comparison, the search proceeds further. Let’s take an example. We want to search the phone number 12345 from the logbook using binary search: 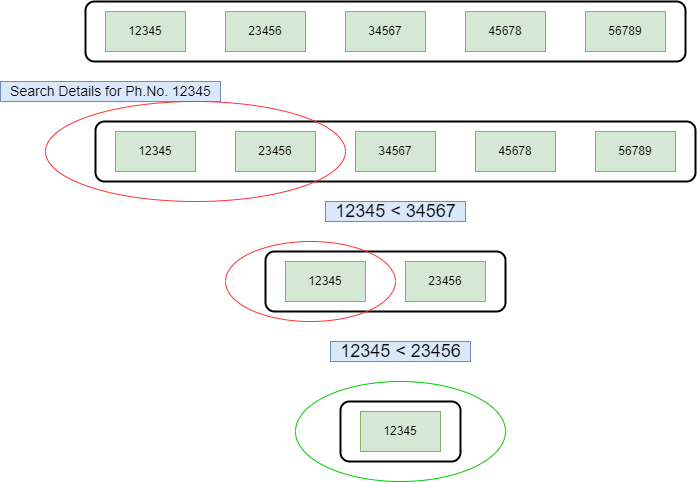 Let’s assume the given array contains

distinct elements. In an average case scenario, the target value can be found in any index from

. Additionally, it may happen that the target value is not present in the given array. Therefore, in the average case, the time complexity of the binary search is

We discussed the different case scenarios and associated time complexities for hash lookup and binary search. Let’s summarize the time complexity discussion and present it in a table:

Hence, as we can see in the table, both the methods take the same time in the best case. Therefore, the performance is the same. However, in the average case scenario, hash lookup is significantly faster than binary search. In real applications, we mainly consider an average case scenario in order to test and compare the performance of different methods. Therefore, hash lookup is a better choice in such cases.

In this tutorial, we discussed two searching methods: binary search and hash lookup. We explained the basics of both methods using examples. Finally, we provided a time performance comparison between both methods.