In this tutorial, we’ll explain the extended Euclidean algorithm (EEA). It’s a tool widely used in cryptography and one of the fundamental algorithms in number theory. In addition to its recursive version, we’ll present its iterative variant.

Bézout’s identity states that the greatest common divisor (GCD) of any two integers is their linear combination. So, if

is the GCD of

, then there exist integers

, which are called Bézout’s coefficients of

. As we’ll see, EEA is a modification of the Euclidean algorithm for finding the GCD of two numbers.

In what follows, we’ll assume that

are both positive and that

. We lose no generality under those assumptions because:

which means that we can consider only the case

The Euclidean algorithm (EA) finds the GCD of

by using the fact that:

and applying Euclidean division until it gets zero as the remainder:

. As we see, the recursion is:

. We’ll find it useful to re-formulate the recursive rule so that we express the remainder in terms of the dividend and the divisor:

4. The Recursive Version of the Extended Euclidean Algorithm

, the GCD of the input numbers

. At that point, it starts recursing back to the beginning, revisiting the division steps of

backward. After backtracking to a division step, REEA expresses the GCD as a combination of the step’s divisor and dividend.

So, from the second-to-last division, we get:

In general, let’s say we revisited the division step

as a linear combination of

Recursing one step back, we substitute

. Applying the algorithm, we do five Euclidean divisions:

After identifying the GCD, we go backward one division step. From there, we get

and climb one step up to see what to substitute

After some elementary algebra, we get that

. Then, we go up a step again to see what to replace

. In the end, we backtrack to the first division step:

5. The Iterative Version of the Extended Euclidean Algorithm

We can compute the coefficients without backtracking. The idea is to express each step’s remainder as a linear combination of

In general, we’ll have:

Hence, these are our forward recurrences for the coefficients:

and gradually work our way through division steps until we calculate the GCD, at which point we also obtain the sought Bézout’s coefficients:

This is how it’ll look like step by step: 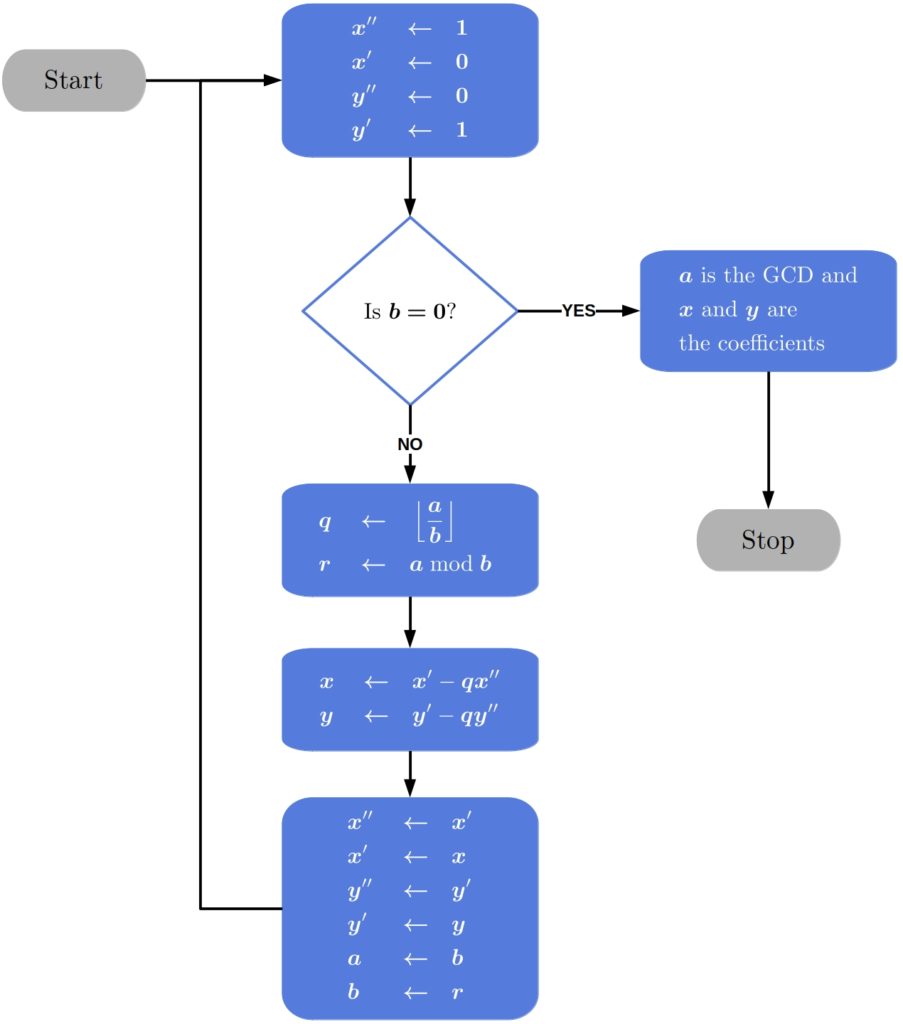 This iterative form of the EEA is equivalent to the Blankinship method for two numbers, which extends EA to find the GCD and Bézout’s coefficients of

Let’s reuse the example for REEA. Here, we compute the coefficients as we perform Euclidean divisions. The first remainder,

, is a direct linear combination of

. Then, we express the remainder

as a linear combination of

with the expression we got in the previous step:

We obtain the coefficients repeating the step. After each division step, we express the remainder in terms of the current dividend and the divisor. Since both have appeared as remainders previously, we replace them with the corresponding linear combinations and simplify the expressions:

W get the same result as with REEA in the end, but without recursion. Generally, the iterative variant should be faster because it avoids recursive calls and keeps the same frame.

5.2. Speeding up the Algorithm

As we see from the recurrences (10), the

-coefficients don’t depend on one another. Moreover, from the final form:

we can calculate the final

if we know the final

and the other way around. So, there’s no need to compute both coefficients as we make division steps. That cuts the number of operations by a third.

6. How Many Coefficients Are There?

The Bézout’s coefficients are not unique, In fact, if

is one pair of Bézout’s coefficients for

, then all the coefficients are of the form:

and EEA always finds one such pair.

In this article, we presented the recursive and iterative forms of the Extended Euclidean Algorithm. It’s used for finding Bézout’s coefficients of two integer numbers and has applications in cryptography.