Dynamic Host Configuration Protocol (DHCP) is a client-server protocol that automatically assigns an Internet Protocol (IP) address to a device as well as other related configurations.

In this tutorial, we’ll discuss this protocol and explore various aspects such as how it works and the benefits it offers.

There are two ways an IP address is assigned to a computer – static and dynamic. A static IP is where a user assigns an IP address manually to a computer. However, this process is tedious and error-prone as it requires manual intervention every time a device joins the network. Dynamic IP assignment resolves this issue.

A dynamic IP is where a computer receives an IP address from a DHCP server. Moreover, a DHCP server also assigns a device a subnet mask, default gateway, and the Domain Name System (DNS) server in addition.

DHCP is a Client-Server protocol. In a network, each device will have a DHCP client installed. Additionally, there’s a DHCP server, which is responsible for the automatic assignment of addresses as requested by the DHCP clients: 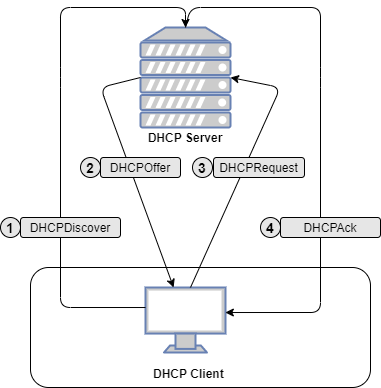 The assignment between the DHCP client and server follows four steps:

The IP address information assigned by DHCP is only valid for a limited period of time and is known as a DHCP lease and the period of validity is called the DHCP lease time.

When the lease expires, the client can no longer use the IP address and has to stop all communication with the IP network unless it requests to extend the lease via the DHCP lease renewal cycle.

To avoid impacts of the DHCP server not being available at the end of the lease time, clients generally start renewing their lease halfway through the lease period. This renewal process ensures robust IP address allocation to devices.

In this tutorial, we discussed the Dynamic Host Configuration Protocol, or DHCP.

First, we discussed IP address management options and explored the importance of dynamically managing the IP addresses of devices. We then learned how DHCP works and the communication happens between a DHCP server and a client. We also discussed the lease management technique.

Finally, we concluded the tutorial by providing the benefits of using DHCP.