In this tutorial, we’ll learn how to find a cycle starting node in a linked list. Also, we’ll analyze the different time and space complexities of each approach. Moreover, we’ll look at the most efficient algorithm and prove it. Furthermore, we’ll prove its linear time complexity. We assume having a basic knowledge of linked list data structure and Big-O notation.

Suppose we’ve got a singly linked list. This list has a cycle. So, our task is to return a cycle start node. The only thing we are given is a linked list head (start node). Let’s look at an example for better understanding:

There are several algorithms that can help us solve this problem. For instance, we can use a HashSet. At each step, we’ll check if the current node exists in our set. If it does, then it will be the starting node of the cycle. If it doesn’t, then we’ve to add this node to the set and move to the next node. The time complexity of such a solution is

. However, space complexity is also

There exists another solution, that uses

time. But, it uses constant memory and we can reduce space complexity to

. This is Floyd’s Hare and Tortoise algorithm. This is a pointer algorithm, which uses a fast and slow pointer to find the cycle start node.

Assume we’ve two pointers. One pointer moves twice faster than another. The slower pointer is called tortoise, for the well-known slowness of this reptile. On the other hand, the faster pointer is called hare. In our diagram, the tortoise is represented in green and the hare in red:

At the very beginning, they stand at the starting node 1 of the list. The tortoise will be moving one node at a time. On the contrary, the hare will move twice as fast, skipping one node. After 4 moves the hare is at node 9. However, the tortoise has just reached node 4.

Is important to notice, they both start looping infinitely. The list contains a cycle and they both enter this cycle. As a consequence, they’ll definitely meet sometime. But, we’re interested in the time period before they meet. This impacts the time complexity of the algorithm. Further, we’ll prove that they’ll meet at most after

is the length of the cycle. It also means that the tortoise won’t even complete the whole cycle before their first meeting.

The first part of an algorithm is simple, our animals will start moving until they meet. Here are the hare and tortoise separate trajectories: 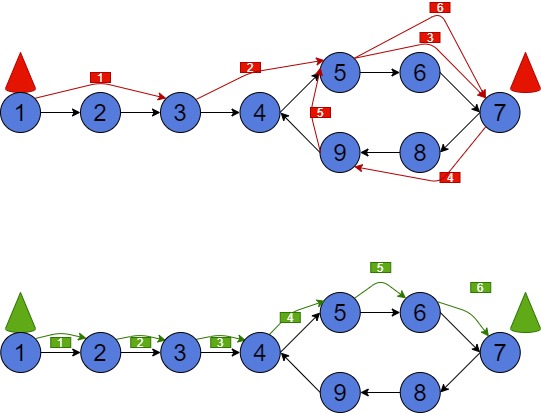 In case they move simultaneously, they’ll both meet in a cycle at node 7 after making 6 steps:

The second part of an algorithm is also simple. We move the hare to the starting position and reduce its speed twice. So, now it has the same speed as the tortoise. The tortoise continues to move from its current position. Next, they again start to move until they meet again. Interesting fact: they’ll meet at the cycle entry point, which is the answer to our problem. After that, we return this node and finish the algorithm.

We’ll prove that they’ll meet again at the node where the cycle starts in the next section. Now, let’s put the hare to the start of the list and see where they’d meet together with the tortoise:

As we can see, our animals meet at node 4, which is exactly the start of the cycle.

The proof is a bit harder than the algorithm, but it is intuitively clear. We’ll divide the proof into three parts.

Firstly, let’s show that they will meet after starting moving. Obviously, they’ll meet in a cycle. Suppose the length of the cycle is

. When the tortoise will enter the cycle, the hair will already be in the cycle at the position

. Now, we can go to another coordinate system. We’ll reduce the speed of hare and tortoise by 1. Now the tortoise won’t move and the hare will move with the speed of 1 node per 1 unit of time. There are

nodes between them. The hare will reach the tortoise in

Let’s think about their real speed. The hare moves twice faster than the tortoise. Therefore, it means, the above-mentioned speed transformations simulate the same situation.

. According to the algorithm, we must reduce the hare’s speed and move it to the beginning of the list. And when they’ll meet again, the meeting point will be the cycle start node.

to be the length of the list from the starting node

to the loop entrance

be the length of the cycle. The hare and the tortoise meet at node

in the loop. Let

be the distance from

be the distance from

. This will help us to explain now why our pointers would meet at the start of the cycle.

We transfer the hare after meeting at

to the start of the list before they start to move again simultaneously. The tortoise will make

loops and appear at

again. It’ll have to make

steps to reach the beginning of the cycle. Is important to remember, we reduce the hare’s speed to be equal to the tortoise one. Thus, the hare will make

and then will have

steps left to the cycle beginning

, same as the tortoise. But, it works if and only if when

is a constant value.

is the modulo operation. It simply means that we can divide

, and the remainder after division will be Z. This will help to prove that animals will meet again at

, then we’re able to reproduce the animals’ movement, mentioned in the previous sub-section. Imagine, distance M might be very long. By proving

Before animals’ first meet, the hare’s distance will be

is a constant value. If

is very long, then the hare will make many loops in a cycle waiting for the tortoise. Meanwhile, the tortoise distance is

. In case the tortoise is twice slower than the hare, we can make up equality:

. Is important to remember, that

on both sides of the equality we get

As we can notice, we use constant space complexity, which is just two pointers: hare and tortoise.

The time complexity of the algorithm is

is the number of nodes in a list. The time complexity is linear, in case we’d make no more than

steps with our pointers before their first meet.

is the length of the cycle and

time. The second part of an algorithm will also take

In this article, we’ve discussed approaches to finding the cycle start node in a linked list. Moreover, we’ve explained and proved the most efficient algorithm to solve this problem. Furthermore, we’ve given an intuitive explanation of the proof. The two-pointer approach is a popular technique, which can be used in many algorithmic problems. For instance, the same hare and tortoise might help us find the duplicate number in an array.