In this tutorial, we’ll talk about Cosine Similarity. First, we’ll define the term and discuss its geometric interpretation. Then, we’ll present some of its applications and an illustrative example.

Cosine similarity is employed as a measurement that quantifies the similarity between two or more non-zero vectors in a multi-dimensional space.

In this way, let’s suppose that we have two vectors

in the n-dimensional space. To compute their cosine similarity, we compute the cosine of their angle

Since the values of

lies in the range

, the similarity value has the following interpretations:

All the intermediate values indicate the respective degree of similarity.

As we mentioned previously, the cosine similarity of two vectors comes from the cosine of the angle of the two vectors. Thus, now we will talk about the geometric interpretation of this similarity metric.

Let’s suppose that the angle between the two vectors is 90 degrees, meaning they have cosine similarity equal to 0. Geometrically, the vectors are perpendicular to each other, which indicates that these vectors do not have any relation.

In the first diagram, the angle of our input vectors 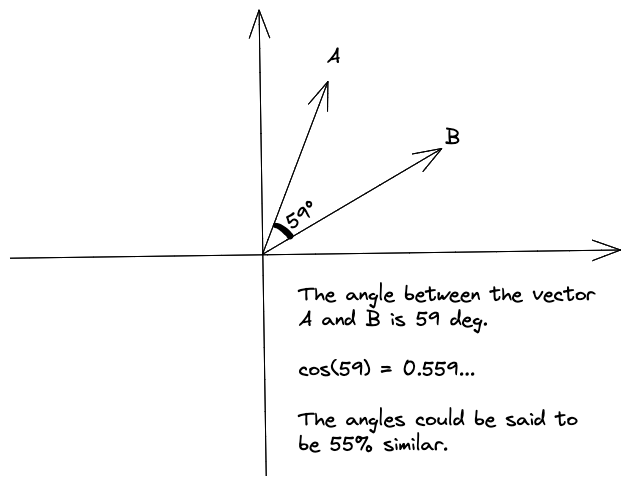 In the second diagram, we decrease the angle of the two vectors to 10 degrees. So, we have

and the vectors are 98% similar: 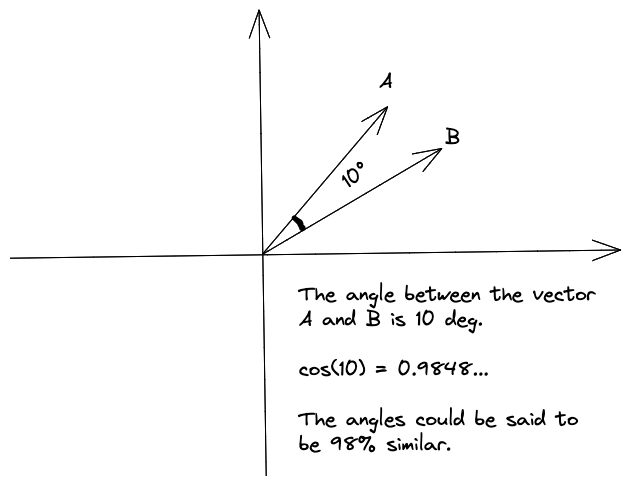 Finally, when the angle of the two vectors goes from 90 to 180 degrees, their cosine similarity decreases until it reaches the value of -1. In this scenario, the two vectors point in opposite directions, meaning they are strongly dissimilar. In the image below, we have

and the vectors are 97% dissimilar: 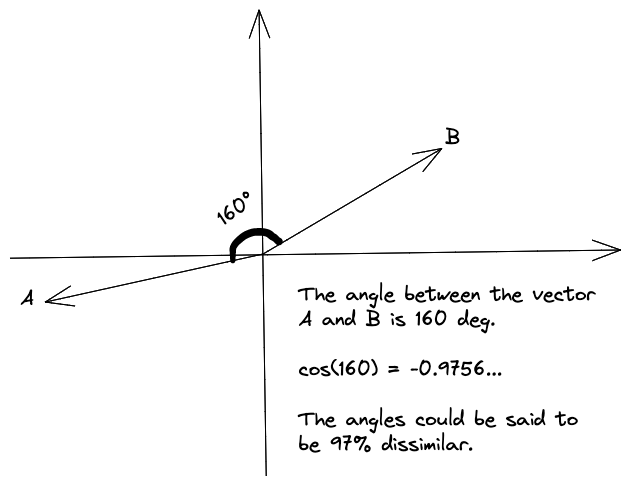 The applications of cosine similarity are numerous. Let’s discuss the most important of them.

Cosine similarity is very applicable in Natural Language Processing, where we often want to measure how semantically similar two words are. This information can be useful in tasks like sentiment analysis, text classification, and summarization.

In recommendation systems, we often want to measure if two users prefer similar content. In this case, cosine similarity can be used to recommend similar items to these users.

When working with high-dimensional data, it is very useful to plot some samples in 2 or 3 dimensions. So, dimensionality reduction methods are always explored to achieve a successful projection. In this context, cosine similarity can be used for preserving the similarity between the data points in the high and the low dimensional space.

Finally, we’ll present an example of computing the cosine similarity between two vectors to illustrate the definition further.

Let’s suppose that we have two vectors

. First, we compute their dot product as follows:

Then, we compute their similarity as follows:

In this article, we talked about the cosine similarity metric. First, we presented the definition of the term and how we interpret it geometrically. Finally, we talked about some of its applications and discussed an illustrative example.