The receptive field of a convolutional neural network is an important concept that is very useful to have in mind when designing new models or even trying to understand already existing ones. Knowing about it allows us to further analyze the inner workings of the neural architecture we’re interested in and think about eventual improvements.

In this tutorial, we’re going to discuss what exactly a receptive field of a CNN is, why it is important and how can we calculate its size.

So what actually is the receptive field of a convolutional neural network? Formally, it is the region in the input space that a particular CNN’s feature is affected by. More informally, it is the part of a tensor that after convolution results in a feature. So basically, it gives us an idea of where we’re getting our results from as data flows through the layers of the network. To further illuminate the concept let’s have a look at this illustration: 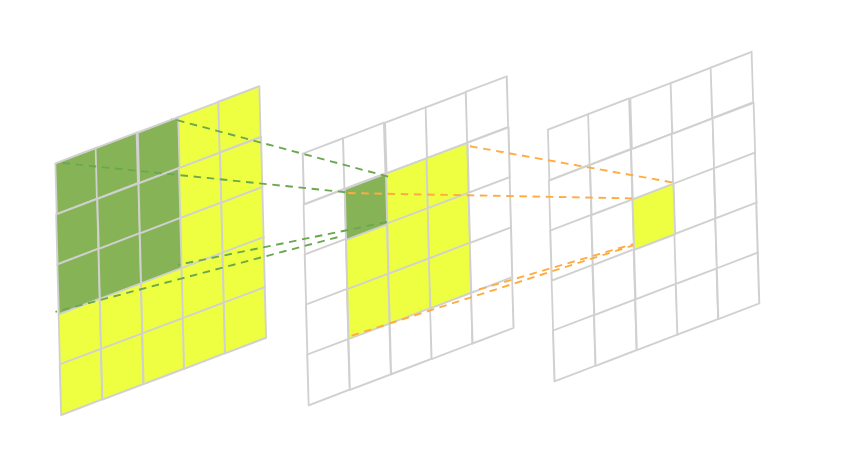 Usually, we’re mostly interested in the size of the receptive field in our initial input to understand how much area the CNN covers from it. This is essential in many computer vision tasks. Take, for example, image segmentation. The network takes an input image and predicts the class label of every pixel building a semantic label map in the process. If the network doesn’t have the capacity to take into account enough surrounding pixels when doing its predictions some larger objects might be left with incomplete boundaries.

The same thing applies to object detection. If the convolutional neural network doesn’t have a large enough receptive field some of the larger objects on the image might be left undetected.

.  The output feature of the

-th layer will be denoted as

. Consequently, the input image will be denoted as

and the final output feature map will correspond to

has its own configuration containing 3 parameters values –  kernel size, stride, and padding. We’ll denote them as

.  So how do we go about it? If we have a second look at the illustration above we might spot something like a pyramidal relationship between the size of the receptive field of the layers.

If we’re interested in the size of the base of the pyramid, we might describe it recursively using a top-to-bottom approach. What is more, we already know the size of the receptive field of the last layer –

. It will always be equal to 1 since each feature in the last layer contributes only to itself. What is left is to find a general way to describe

Let’s further simplify the problem and imagine our neural network as a stack of 1-dimensional convolutions. This doesn’t imply a loss of generality since most of the time the convolutional kernels are symmetric along their dimensions. And even if we work with asymmetric kernels we can apply the same solution along the dimensions separately. So here is our simple 1-d CNN: 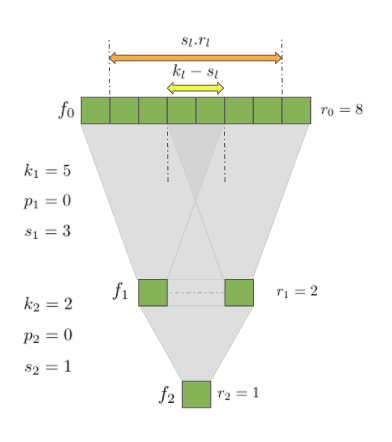 If we look at the relationship between

it is pretty easy to see why the receptive field size is 2 –  a kernel with size two is applied once. But when we go from

things start to get a bit more complicated.

and come up with a general solution that works everywhere. As a start, let’s try and calculate

in the above architecture. One good guess might be to scale

, denoted on the graph with the orange arrow. This gets us close, but not quite. We are not taking into account the fact that when the kernel size is different from the stride size we get a bit of a mismatch.

so there is a mismatch of

denoted with the yellow arrow. This mismatch can generally be described as

. If it were the other way around and

, there would have been a gap and

will be negative. Either way, we would simply need to add this difference to the scaled receptive field of the current layer.

Doing so gives us the following formula:

. However, it turns out we can do better. There is another way to analytically solve the recursive equation for

The full derivation of this formula can be seen in the work of Araujo et. al.

Now that we can calculate the size of the region that affects the output feature map, we might also start thinking about which are the precise coordinates of that region. This might be useful when debugging a complex convolutional architecture, for example.

. We’ll also define the first feature index to be zero (not including the padding). Take for example this simple neural network, where 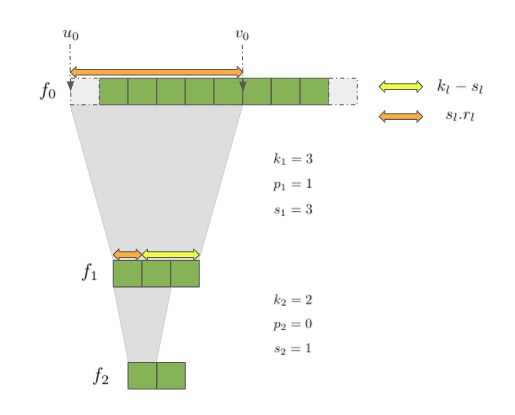 . Take for example the case when

.  But what happens when

. Well, we’ll need to take the left-most index a stride away from

the same calculation will be

and so on. This gives us the following formula:

To find the right-most index

It is pretty straightforward to use the analytical solution in order to calculate the receptive field of the input layer:

we can simply use the above formulas and apply them:

In this article, we learned the receptive field of a convolutional neural network and why it is useful to know its size. We also took the time and followed through the derivations of a few very useful formulas for calculating both the receptive field size and location.