In this tutorial, we’ll talk about the differences between two basic object-oriented programming concepts: objects and classes.

Object Oriented Programming or OOP is a computer programming model that focuses on “what” rather than “how”. In it, we organize our code around data as opposed to other paradigms, such as functional programming, in which we base our design on operations we can do with input.

The building blocks of an OOP-based design are classes, objects, attributes, and methods:

An attribute is a standalone part of the data an object has. A method is an operation we can do with an object. But, what are classes and objects, and what are their differences?

A class differs from an object in terms of its role in the overall design.

So, a class is a template that we use to create as many objects as we need in our program. It defines the objects’ relevant properties (attributes) and behavior (methods). An object of a class is each entity that conforms to the class specifies and has all the attributes and methods it defines.

Let’s go through an example.

Let’s suppose we model a human as a class we’ll name Person. We can define the following four attributes each person will have in our application:

Next, we define two methods to model what a person can do with those attributes:

Schematically, this is our class: 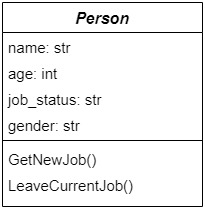 As we see, their attributes have specific values at the time of their creation.

To conclude, we call a class a user-defined type, whereas we can think of an object of that class as a variable of the type.

We can say that a class is never created and is only defined. That means that a class is an abstract model of real-world entities, so it can only have a definition. It can’t exist among its objects and can only describe them. We need to define classes fully before compilation/execution.

In contrast, objects model real-world entities. Consequently, we say they can be created, which is the process we call instantiation. This happens at the run time.

To create an object, we need to assign specific values to the attributes its class specifies it should have.

In contrast, to define a class, we need to list all the attributes and methods its objects should have. For each attribute, we need to specify its name and type. In most programming languages, we also qualify each attribute with various access modifiers, such as private or public in Java. Those modifiers determine if attributes and methods are visible from outside the class and its objects.

On the other hand, we don’t say objects inherit one another. Instead, objects’ types are the classes they belong to. If we instantiate an object x as an instance of class A and let B be the parent of A, we say that x is of types A and B. Since A is more specific, we declare x as a variable of type A, but it isn’t wrong to consider and use it as an object of type B as well. We can this polymorphism.

We can’t change a class after defining it. This is how OOP works in most such languages.

On the other hand, we can alter objects after instantiation. That means we can change their attributes. The condition for this is that the definition of their class allows us to do it.

From this perspective, classes are static, and objects are dynamic constructs since the former can’t but the latter can change during the execution of our code.

Once we create an object, the operating system allocates memory for it. Objects are usually in the heap section of the process memory layout.

The definition of a class also takes a small amount of memory, but the actual management depends on the programming language. In C++, we store class definitions in the process code section. In Java, a class is treated the same way as an object, so it also lives in the heap.

Let’s quickly summarize the difference between a class and an object. The following table highlights the key differences between the two:

In this article, we have revisited object-oriented programming and its two basic constructs: classes and objects.

A class is a formal description of a group of entities falling under a common definition and having common attributes and methods. It acts as a programming template for those entities, which we call objects. A class defines what an object is, what attributes it will have, and how it will behave. As a result, objects are instances of a class and always conform to the template of their class models.