When something goes wrong when executing our programs’ source code, we commonly say that they have some bug. The term bug got pretty familiar in the programming world. However, what a bug means in technical terms?

From a historical perspective, the term “bug” emerged in the context of hardware engineering. In this context, a bug describes little problems or difficulties in building or using a piece of equipment. Many years later, the term bug became popular in computing and software development.

In this tutorial, we’ll study the most modern concept of bugs in programming. We’ll first understand what exactly a bug is and which are the different categories of them. Then, we’ll explore the debugging process, investigating how to detect and solve programming bugs.

We can assume that bugs are coding errors in our source code. In summary, we can say that bugs are human-made and generally created due to the implementation difficulties of complex routines.

But, it is not unusual for bugs to be detected in the beta testing stages of software or only after its release. In such cases, users should avoid buggy operations until the programmers prepare a correction patch for the software.

It is relevant to highlight that there are different categories of bugs. Furthermore, each bug can be more or less severe regarding the impact it causes on the overall software and the final users: it can be low to critical.

Another potential problem related to bugs consists of inadvertently creating backdoors. Malicious entities can exploit particular categories of bugs to invade and take control of an entire computing system.

Taking into account all the described scenarios until now, in the subsections next, we’ll specifically explore different bug categories. These categories are summarized in the following figure: 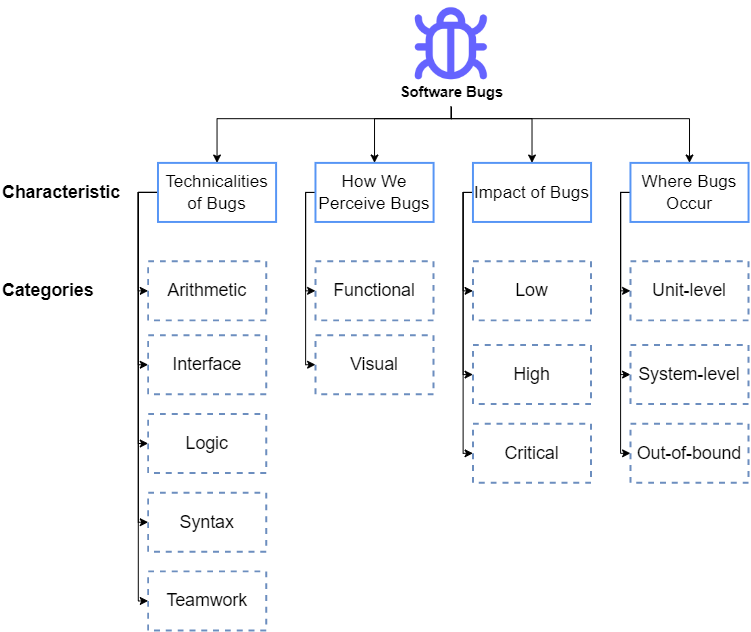 2.1. Categories Regarding Technicalities of Bugs

Considering the technical aspects of a bug, we have five different categories of them:

2.2. Categories Regarding How We Perceive Bugs

We have two categories that approach bugs in terms of the user’s perception of them:

2.3. Categories Regarding the Impact of Bugs

By analyzing how many problems a bug can cause for the users of a software, we can consider three categories:

2.4. Categories Regarding Where Bugs Occur

The first step to solving bugs in a software program is finding them. Currently, the most relevant process to find bugs consists of executing different software testing routines. We can highlight three categories of tests usually employed to detect potential bugs:

In addition to executing the previously presented test routines, we can use benchmarks to find bugs that harm the performance of a software program. Benchmarks, in short, are tests to evaluate (mainly) the responsiveness and speed of a software program under different conditions and workloads. Among the most common benchmarks categories, we have:

Once we find a bug, we must now solve it. The process of solving bugs is called debugging. We’ll discuss this process in detail in the following subsection.

The main idea around the debugging process is correcting a bug or finding ways to isolate it, making the software never activate the bug. Thus, debugging is a critical stage of the software development lifecycle, avoiding multiple after-releasing problems.

We can summarize the debugging process into three steps:

Some debugging processes are simple, and we can solve the bugs fast and efficiently. However, other ones are very complex, requiring much effort to solve a single bug.

Some scenarios that make a bug complex to deal with are when it has an unclear cause or presents a stochastic behavior, thus making it hard to reproduce and solve in the debugging process.

The development team can adopt tools to make the debugging process more efficient. Some debuggers are language-dependent, and others handle multiple languages. Furthermore, we have standalone debuggers and IDE-coupled ones. Examples of popular debuggers are the GNU Debugger (GDB), the Eclipse Debugger API, and Valgrind.

In this article, we studied bugs and the debugging process. At first, we investigated the concept of a bug and its different categories. Thus, we analyzed how to find bugs and solve them through debugging.

We can conclude that bugs represent a relevant challenge during the development and release of a software program. The general idea is: as soon we find and solve bugs, the better. Thus, the development team should keep an eye on that, frequently executing testing routines and debugging processes.