Thus, to optimize any graph algorithm, we should know which graph representation to choose. The choice depends on the particular graph problem. In this article, we’ll use Big-O notation to describe the time and space complexity of methods that represent a graph.

that are connected by edges

. An edge is a pair of vertices

. Each edge has its starting and ending vertices. If graph is undirected,

. But, in directed graph the order of starting and ending vertices matters and

Here is an example of an undirected graph, which we’ll use in further examples: 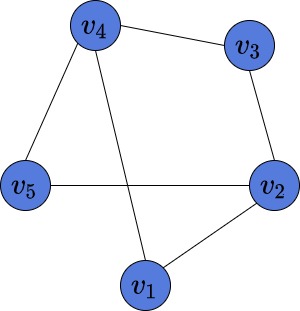 This graph consists of 5 vertices

, which are connected by 6 edges

Some graphs might have many vertices, but few edges. These ones are called sparse. On the other hand, the ones with many edges are called dense. Our graph is neither sparse nor dense. However, in this article, we’ll see that the graph structure is relevant for choosing the way to represent it in memory.

The first way to represent a graph in a computer’s memory is to build an adjacency matrix. Assume our graph consists of

.  An adjacency matrix is a binary matrix of size

. There are two possible values in each cell of the matrix: 0 and 1. Suppose there exists an edge between vertices

. It means, that the value in the

column of such matrix is equal to 1. Importantly, if the graph is undirected then the matrix is symmetric.

Here is an example of an adjacency matrix, corresponding to the above graph: 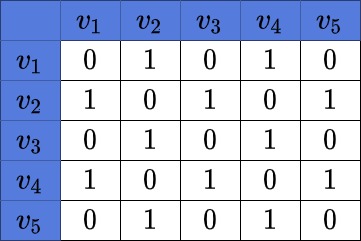 We may notice the symmetry of the matrix. Also, we can see, there are 6 edges in the matrix. It means, there are 12 cells in its adjacency matrix with a value of 1.

Assuming the graph has

vertices, the time complexity to build such a matrix is

. The space complexity is also

. Given a graph, to build the adjacency matrix, we need to create a square

matrix and fill its values with 0 and 1. It costs us

of vertices. The amount of such pairs of

. That is why the time complexity of building the matrix is

The advantage of such representation is that we can check in

time if there exists edge

by simply checking the value at

column of our matrix.

However, this approach has one big disadvantage. We need

edges. The matrix will be full of ones except the main diagonal, where all the values will be equal to zero. But, the complete graphs rarely happens in real-life problems. So, if the target graph would contain many vertices and few edges, then representing it with the adjacency matrix is inefficient.

The other way to represent a graph in memory is by building the adjacent list. If the graph consists of

is also a list and contains all the vertices, adjacent to the current vertex

. By choosing an adjacency list as a way to store the graph in memory, this may save us space.

This is the adjacency list of the graph above: 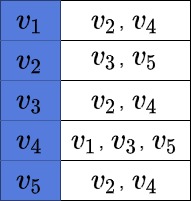 We may notice, that this graph representation contains only the information about the edges, which are present in the graph.

is the number of edges in a graph, then the time complexity of building such a list is

. The space complexity is

. But, in the worst case of a complete graph, which contains

edges, the time and space complexities reduce to

As it was mentioned, complete graphs are rarely meet. Thus, this representation is more efficient if space matters. Moreover, we may notice, that the amount of edges doesn’t play any role in the space complexity of the adjacency matrix, which is fixed. But, the fewer edges we have in our graph the less space it takes to build an adjacency list.

However, there is a major disadvantage of representing the graph with the adjacency list. The access time to check whether edge

vertices, for every vertex

element, as every vertex is connected with every other vertex in such a graph.

Therefore, the time complexity checking the presence of an edge in the adjacency list is

. Let’s assume that an algorithm often requires checking the presence of an arbitrary edge in a graph. Also, time matters to us. Here, using an adjacency list would be inefficient.

Let’s now see the worst-case complexity of removing a vertex and an edge.

Let’s suppose we want to remove

If we use the adjacency matrix, we’ll have to set all the entries in the

-th row and the

-th column to zero. Doing so will delete all the edges incident to

from the graph. In total, we’ll iterate over

cells, so the time complexity will be

On the other hand, removing a vertex from an adjacency list will cost more. To remove all the outgoing edges, we set to NULL the pointer to the

. However, to delete all the occurrences of

from other nodes’ lists, we have to iterate over all the other lists. In the worst case, each node will be connected to all the other vertices, so we’ll traverse

To remove an edge

from an adjacency matrix

to zero. If the graph is symmetric, we do the same with

. Accessing a cell in the matrix is an

operation, so the complexity is

in the best-case, average-case, and worst-case scenarios.

If we store the graph as an adjacency list, the complexity of deleting an edge is

. That’s because, in the worst case, we traverse the whole list

from it. If the graph is symmetric, we do the same with

from it. In total, we iterate over no more than

elements, so the complexity is