Historically, computers worked with several different architectures regarding how much memory they accessed in each memory word. These different lengths of memory words can change from software development processes to the daily usage of computers.

In this tutorial, we’ll explore how different architectures impact the memory capacities of computers.

2. A Little Bit of Historical Context

Most electronic computing machines require memory to execute their tasks. Historically, the need for memory has changed according to the computing power evolution. Legacy computers employed processors which accessed, for example, 8 or 16 bits at a time in a computer register.

Modern computers, however, typically require much more memory to execute programs. It led to the rising of 32-bit architectures, which were very popular in the ’90s and early 2000.

With the evolution of technology, more memory became necessary to represent both data and instructions. So, the adoption of 64-bit machines has grown from the late ‘2000s to now.

It is relevant to highlight that, although 64-bit computers have been replacing 32-bit computers, the latter is still being used nowadays.

3. General Characteristics of 32 and 64-Bit Architectures

We can understand 32 and 64-bit architectures as the amount of data that a CPU processes each time. The architecture defines, for instance, the total memory supported by a register at once. Also, it typically determines the size of the instruction set employed by a processor.

However, the extra memory to deal with instructions and data in the registers is only one point. The 64-bit architecture addresses more memory than the 32-bit architecture, such as random and virtual memory. We’ll see a detailed explanation about that in the next section.

Furthermore, programs have versions according to the processors’ architecture. But, in general, it does not mean modifying the programs’ source code.

In such a way, changing from one architecture to another typically means defining some compilers’ configuration flags. So, the most differences will be in the programs’ binary.

One of the most prominent differences between adopting a 32 or 64-bit architecture consists of the amount of memory addressed. As we previously pointed out in the last section, architectures of 64 bits can tackle much more memory than architectures of 32 bits.

This difference in memory support comes from the number of different addresses expressable in a single memory word. We should remember that a computer fully maps its memory, byte by byte.

So, in a 32-bit architecture, we have

In the same way, in a 64-bit architecture, we have

The following image depicts and compares the memory words of both architecture models: 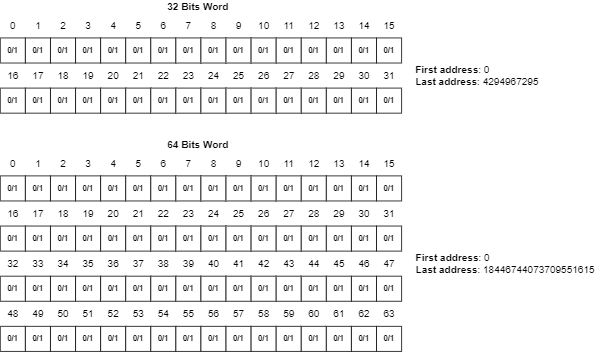 Thus, 32 and 64-bit architectures have sufficient addresses for 4GB and 16,777,216TB of memory, respectively. However, it does not mean that all of them will be practically used.

Some addresses are kept for particular purposes, such as memory-mapped hardware devices. So, it is usual 32-bit machines map about 3.2 ~ 3.4 GB of memory.

Furthermore, we do not have computers with enough RAM to employ every address made available by 64-bit architectures. In this way, many of these addresses are unused nowadays.

Besides RAM, the theoretical limit of memory also changes other memory aspects when using a 32 or 64-bit architecture. Examples of these aspects are presented in the following table:

As we stated for the RAM, theoretical memory limits do not mean equivalent memory amounts in practice.

In the previous sections, we studied basic concepts of both 32 and 64-bit architectures, in-depth exploring their memory-supporting limits.

In summary, there are almost no disadvantages to adopting a 64-bit architecture in modern computers. Architectures working with 64 bits enlarge the theoretical limits of several memory aspects, being able to tackle the upcoming technologies.

The only convincing reason to keep producing 32-bit processors is maintaining compatibility with computers from the late ’90s and early 2000. The same reason works for providing 32-bit software versions.

The following table summarizes some characteristics of the studied architectures that support the previous statements:

A particular benefit consists of the enlarged memory limits accommodating new technologies that will emerge in the following years. Another clear benefit is the compatibility with modern software since some of them are released only with a 64-bit version.

We can conclude that modern computers have several advantages and almost no disadvantages in adopting the 64-bit architecture.