In this tutorial, we’ll discuss finding the shortest path in a graph visiting all nodes.

First, we’ll define the problem and provide an example that explains it. Then, we’ll discuss two different approaches to solve this problem.

Suppose we have a graph,

. In addition, we have

edges that connect these nodes. Each of these edges has a weight associated with it, representing the cost to use this edge.

Our task is to find the shortest path that goes through all nodes in the given graph.

Recall that the shortest path between two nodes

In this task, we look for all the paths that cover all possible starting and ending nodes. Besides, we can visit the same node more than once. Let’s look at an example for better understanding.

Suppose we have the following graph: 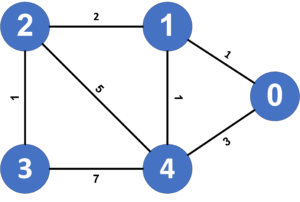 As we can see, there’re many paths that go through all nodes in the given graph, but the shortest path among them

, and it has a cost equal to

; therefore, the shortest path in the given graph visiting all nodes has a cost equal to

The main idea here is to generate all the possible paths and get the one that has the minimum cost.

Firstly, we’ll generate all the possible permutations of nodes. Each permutation will represent the order of visiting nodes in the graph. A path’s cost will be equal to the sum of all shortest paths between every two consecutive nodes.

Finally, the shortest path visiting all nodes in a graph will have the minimum cost among all possible paths.

, which stores the shortest path between every pair of nodes in the given graph using the Floyd-Warshall algorithm.

value, then we’ll update the

, which stores the cost of the shortest path visiting all nodes in the given graph.

First, the Floyd-Warshall algorithm has complexity

. Next, the number of all different permutations of

nodes is equal to the factorial of

, and for each permutation, we calculate its cost by passing through it, so it’s

Therefore, the total complexity will be

In the end, our answer we’ll be the minimum value among all nodes’ values that have a bitmask full of ones (visited all nodes).

, which stores the shortest path to some node visiting a subset of nodes. We also declare a priority queue that stores a node and a bitmask. The bitmask represents all visited nodes to get to this node. This priority queue will sort states in acceding order according to the cost of the state.

Next, we try to start the shortest path from each node by adding each node to the priority queue and turning their bit on. Then, we run the Dijkstra algorithm.

We iterate over the children nodes of the

, we check if the

plus the weight of the edge that connects the

. In this case, we need to update the

node. Also, we add the

to the priority queue. This mask means that we turn the bit of the

Finally, our answer will be the minimum value among all the nodes cost visiting all nodes.

is the number of all possible subset of nodes, and

for adding each state to the priority queue.

In this article, we presented the problem of finding the shortest path visiting all nodes. We explained the main ideas behind two different approaches to solving this problem and walked through their implementation.